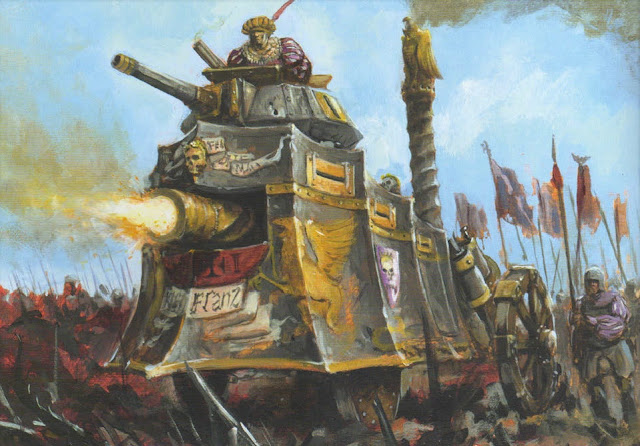 Welcome back and happy Tanks-giving ! This blog will focus on the ever illustrious Empire Steam Tank, a benchmark of imperial engineering and a powerful addition to my ever-expanding Reikland army. As some players might recall, the steam tank comes in a standard Conqueror  pattern of design, but many various options are also available. I wanted to make sure my tank could accommodate as many of these combinations as possible, at least within reason. With this in mind, magnetization became the only viable option. Likewise, as only one tank is allowed per 2000 pts of army, I don't think bringing a second tank will happen often, if ever. Fortunately for me, I already had (most of) a classic metal steam tank! Unfortunately, it was quite damaged and needed its paint stripped. Without further ado, it got the ol' dunk with some other High Elf bits. One piece missing, however, was the rear turret hatch. There was no way I was scouring eBay for a new one, so I instead opted to try out
2 comments
Show me other stuff 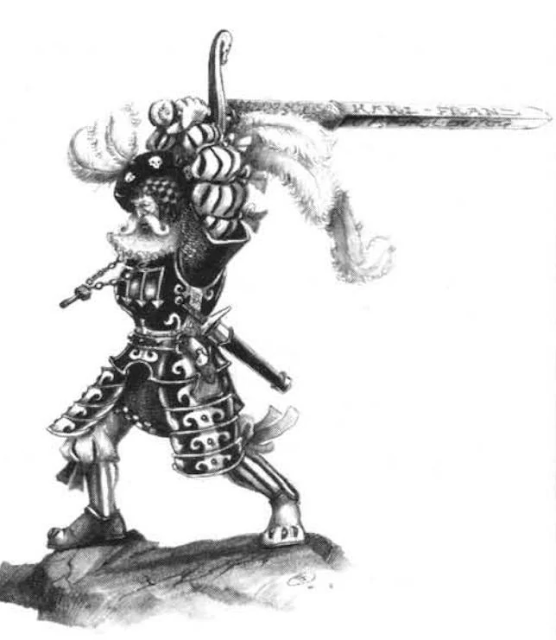 Time for another hobby update! This update will focus on my first regiment of  great swords, the emperor's own bodyguard, the Reiksguard. Normally, the Reiksguard are seen toting lances and riding barded steeds on the battlefield, but since my army hails from Reikland, it felt only natural to have them also manifest as the  Zweihänder wielding infantry, as they did in the Storm of Chaos  supplement. The first regiment of Reiksguard, ready for battle. This banner was converted using a state troops plastic banner. I replaced the bendy white metal banner pole with a brass rod, as well. The noble champion leads his men into the fray. The unit's die-hard musician beats out a steady rhythm throughout even the most desperate of fights. My second regiment of Reiksguard line up into marching order. My second Reiksguard champion was converted using a head swap from the 6th edition plastic Empire state troops box set.    The second unit's standard bearer carries the proud banner of t
2 comments
Show me other stuff
More posts

Popular posts from this blog 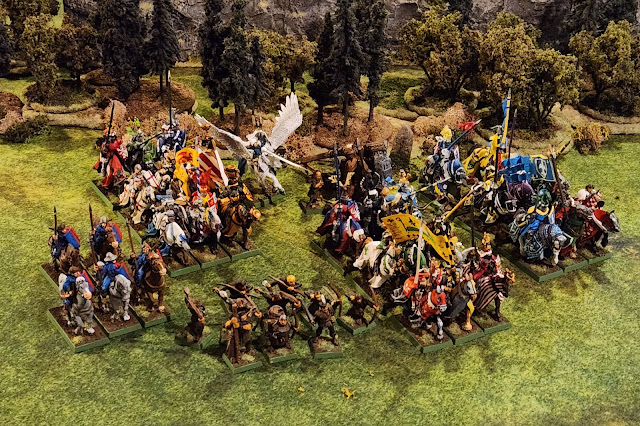 Gather 'round and listen to a tale of noble knights and fickle fortunes! In this battle report, we'll be again chronicling a battle between Brettonia and The Empire, this time at 1200 pts. The Armies Brettonian Army Paladin - General 95pts -Barded Warhorse -Lance -Shield -Virtue of Discipline (1st) Paladin - Battle Standard Bearer 74 pts -Barded Warhorse Paladin 136 pts -Royal Pegasus -Lance -Shield -Virtue of Noble Disdain (1st) 8x Knights of the Realm 216 pts 8x Knights of the Realm 216 pts 8x Knights of the Realm 216 pts 5x Mounted Yeomen 87 pts 10x Peasant Bowmen Skirmishers 70 pts -Shields Field Trebuchet 90 pts Of course, I can't speak for Mike's strategy, but if I had to guess, I would say the strategy was in true Brettonian fashion; hit hard with the lance formations of knights and their embedded heroes. The trebuchet would keep me from getting too comfortable or at least punish my forces for not engaging in melee. The mounted yeomen could counter march blocking
Show me other stuff 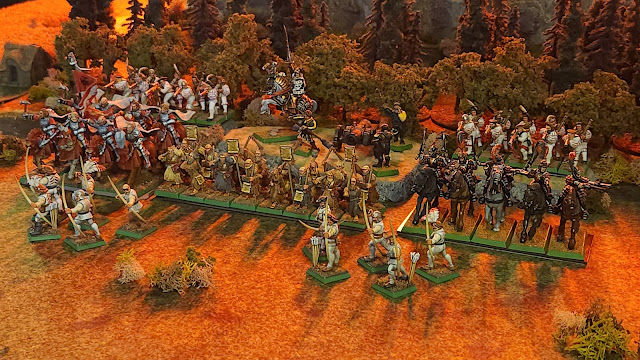 Welcome back to the bloggy for a new battle report! This time, I had the pleasure of playing Warhammer Fantasy Battles 6th Edition , a classic, and my favorite, edition of the game which survives in our hearts and memories. I can still remember distinctly the first time I picked up the 6th edition "big rule book." I had just returned from staying with my grandmother in Florida during the summer of 2000. The new (and sealed) book was waiting for me back home, but I begged my parents to bring it with them when they picked me up from the airport so I didn't need to wait another excruciating 30-45 minutes without it. All summer I had pored over my glorious Warhammer Armies: Skaven supplement, imagining the incredible horde of chittering ratmen I would loose upon the denizens of the Old World. However, little of the supplement made much practical sense, as I had never read the actual rules  of the game. Frustratingly, my entire understanding revolved around what my thirteen y
Show me other stuff

Time for another hobby update! This update will focus on my first regiment of  great swords, the emperor's own bodyguard, the Reiksguard. Normally, the Reiksguard are seen toting lances and riding barded steeds on the battlefield, but since my army hails from Reikland, it felt only natural to have them also manifest as the  Zweihänder wielding infantry, as they did in the Storm of Chaos  supplement. The first regiment of Reiksguard, ready for battle. This banner was converted using a state troops plastic banner. I replaced the bendy white metal banner pole with a brass rod, as well. The noble champion leads his men into the fray. The unit's die-hard musician beats out a steady rhythm throughout even the most desperate of fights. My second regiment of Reiksguard line up into marching order. My second Reiksguard champion was converted using a head swap from the 6th edition plastic Empire state troops box set.    The second unit's standard bearer carries the proud banner of t
Show me other stuff 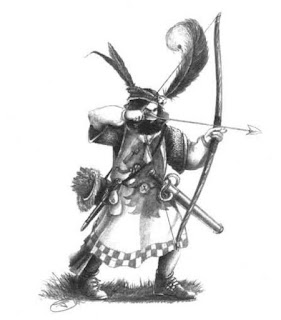 Willkommen meine Mitmenschen aus Reikland! In this blog I'll be sharing pictures of my newest Empire unit(s), some tactically flexible and utterly expendable archers! Please note, these archers are not the dreaded huntsmen, masters of the wilderness and invaluable scouts. My archers are explicitly chaff. Their role is to die so that other, more expensive units, may live. Anyway, here are some pics! Since the last iteration of Empire Archers from Games Workshop currently can be purchased for around $100-150 on eBay, I instead decided to use some third party miniatures. After much consideration and internet exploration, I settled on two wonderful Mercenary and Militia kits from  Reptilian Overlords . There's about a 99% chance I'll be using these kits in the future to fill out my existing units or build new ones from scratch- they're just too versatile and great. I initially did some test prints to see how the RO minis scaled vs more modern and classic GW minis. There'
Show me other stuff

SAGA Age of Magic: The Great Kingdoms vs The Horde 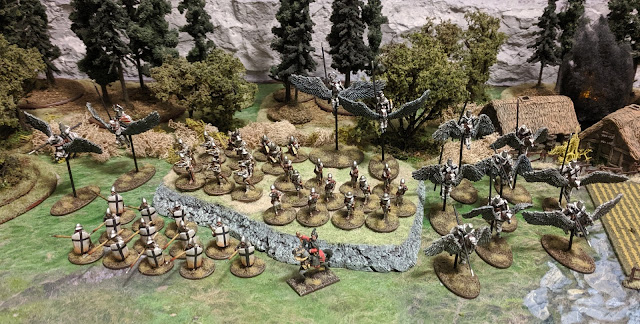 Welcome back for another game of SAGA Age of Magic. Today, I played an 8 pt game against my friend Matt. Matt's new to the game and hobby overall, but he's quickly learning how to roll the bones. Rather than complicate things via the Book of Battles, we chose to play a standard game of  Clash of Warlords . The Narrative: The Outlands are on fire. All along the horizon, columns of smoke herald the coming of unspeakable monstrosities. These are enemies without remorse, fear, or mercy. A cold, clammy dread seizes the heart of The Protectorate as wide eyed, blood soaked survivors spread tales of raids, massacres, and unearthly terror. Sworn to protect the meek, His Order of the Ebon Cross is roused and readied in the panoply of war. Prayers are spoken, oaths taken, and weapons anointed. Time is fleeting and the fate of the Outlands must be decided.  The Outlands are on fire. Below are our lists. THE GREAT KINGDOMS 8  pts Warlord -mounted: flying Sorcerer 1 pt
Show me other stuff 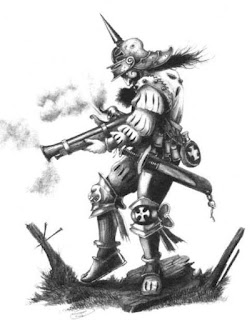 Hello and welcome back to another riveting entry into my hobby bloggy. This entry will cover the newest edition to my Warhammer Fantasy Battles  Empire army; handgunners! As you all are acutely aware from my last blog , I'm currently working on a Reiklander army. Reikland uniforms are nice and clean white with red slashes, but are a total bear to paint. These units were no less challenging than the last, especially as I elected to paint 30 at once. To begin, I started converting some ancient 6th edition starter set handgunners. Luckily I already had a collection from my childhood, though over the years I've accumulated more from swap meets and eBay. I needed 27 original monopose gunners (12 aiming, 15 at ease) and 3 of the (relatively) new 7th edition ones with their big ol' Hochland Long Rifles to serve as my Marksmen. To break up the monotony of the monpose figures, I spent a little time swapping heads with other state troop sets and even some  Reptilian Overlords  3D pri
Show me other stuff 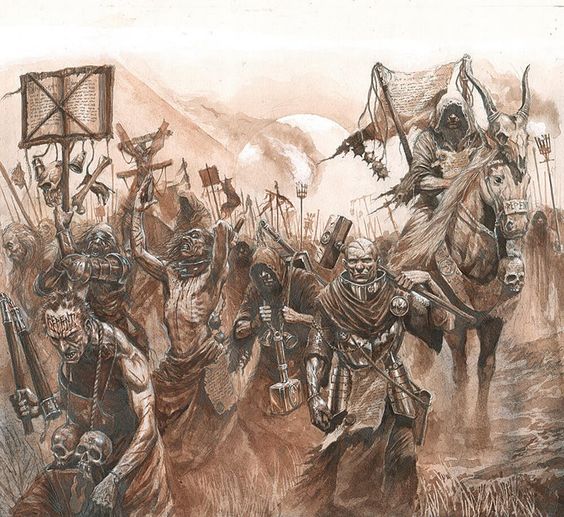 Hey folks, welcome back to my blog for another hobby update. This blog will feature my newly painted flagellants, the most painful tar pit unit available to the noble empire of man. Flagellant miniatures, the 6th edition ones anyway, are in my opinion some of the best sculpts to come out of Games Workshop's Warhammer Fantasy Battles  miniatures line. These minis really capture the grim dark setting, unlike the later plastic kit (which instead features hulking, muscular body builders). After some Facebook Marketplace dealings, I was able to accumulate enough flagellants from the distant land of Poland. Flagellants are limited to one unit per army (for 6th edition anyway), so at maximum I would need thirty miniatures for a full regiment. However, through the strange vagaries of fate, I ended up with thirty-one flagellants. Naturally, this extra flagellant was converted to a Prophet of Doom (the unit champion). This was accomplished with a little swapperoo using a spare staff capita
Show me other stuff

SAGA Age of Magic: SOLO SHOWDOWN: The Undead Legion vs Lords of the Wild 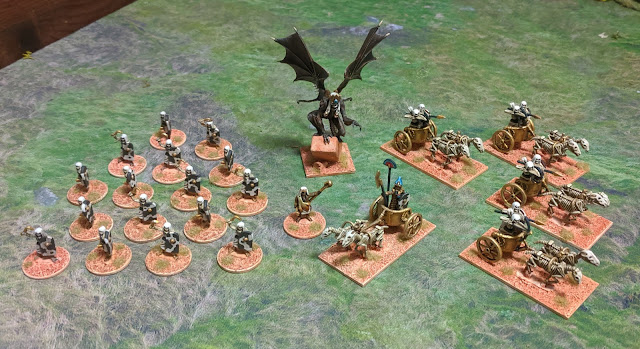 Welcome back to another rousing game of SAGA Age of Magic. Tonight, I once again played myself using my Undead Legion and Lords of the Wild warbands. I'd been hankering to try the legendary Undead warband, The Royal Dynasty of Nephren-Ka,  and take those characterful dynastic chariots for a spin. I wasn't sure how well they'd play, especially since I've never used cavalry with composite bows before, but how bad could it be? I created two warbands of six points, as listed below: THE UNDEAD LEGION  6 pts  (The Royal Dynasty of Nephren-Ka)
Show me other stuff 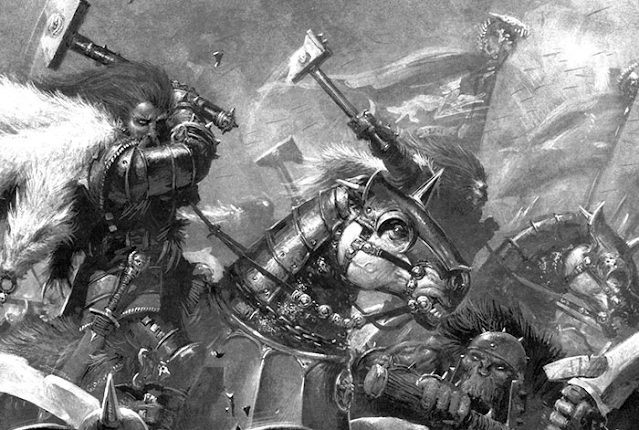 Hey folks, welcome back! Excuse my absence, it's been a minute. This blog focuses on the first unit of Warhammer Fantasy Battles I've painted in oh, about 12 years or so. It's a pleasure returning to the old world and I couldn't be more excited to spruce up and round of my classic Empire force! Rather than start with something reasonable, like a lone hero or something, I decided to crank out a full fifteen man unit of Knights of the White Wolf, the templars in service to Al-Ulric, the leader of the Cult of Ulric and High Priest of Middenheim.  I still had many of these guys in my now ancient collection when I began the project, but I did round them out with a few nifty eBay purchases as well. My knights were in all different states of assembly, painting, and general completeness; some were missing parts or had cobbled together alternatives crafted by my boyish hands over a decade ago. I also had never been happy with the original plastic head sculpts, so while we were
Show me other stuff 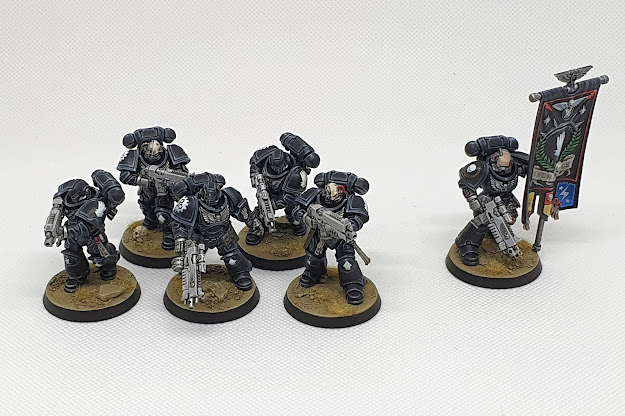 Hello everyone, welcome back! This blog post covers the final touches of my intercessor squad and primaris ancient, basing. I struggled quite a bit and experimented with several different products before settling on a final method, so let's get started!
Show me other stuff